In the Campoleggio district of Fermo there is the Oratory of St. Monica, in Gothic style, and the St. Augustine Church, which dates back to the 13th century.

Built between 1423 and 1425 at the behest of Giovanni di Guglielmo da Fermo, as stated in a plaque placed outside the building, this small place of worship was initially dedicated to Saints John the Baptist and the Evangelist. Inside there is an important cycle of late Gothic frescoes with the stories of the homonymous Saints intertwined with some votive images, such as the Virgin of Loreto and a Madonna and Child by an uncertain author.

In the complex urban context of Fermo, the district of Campoleggio is undoubtedly one of the most interesting districts, rich in various Roman, medieval and Renaissance artistic testimonies that still document the economic vitality and the careful choices of those who lived there, even after many centuries.

Among these artistic elements, the Oratory of Santa Monica stands out and preserves an important cycle of late Gothic frescoes, which were restored thanks to the determination of the Confraternity that owns the Oratory since 1825.

On the plaque set into the facade is written with gothic characters that the building was built between 1423 and 1425 by Giovanni di Guglielmo from Fermo. The simple architectural structure shows the most typical features of the measured and composed Gothic that characterizes the local architecture between the end of the fourteenth century and the beginning of the fifteenth. The simple gabled façade is crowned by a sequence of brick arches that frame the ceramic basins made by a central-Italian manufacturer of that time; further down there was a group of saints in majolica glazed with bright colors, today reduced to a few fragments.

The strict doorway was once topped by a brick pinnacle culminating with a statue of the Baptist in polychrome stone, now kept inside the oratory; also the elegant terracotta phytomorphic scrolls adorning the small single-lancet windows that give light inside the temple are noteworthy.

The frescoes of St. Monica Oratory

The St. Monica Oratory shows a quadrangular shape with a sail cover; it was decorated around 1430 with a cycle of frescoes that, to allow the rehabilitation of the wall structures, were torn from the walls twenty years ago. They were relocated and restored only in 1995.

The attribution of these fascinating frescoes is still an intriguing problem for art historians: Pasquale Rotondi (1936) assigned them to Salimbeni brothers, a reference accepted by various scholars, until the same Rotondi in 1962 reported them to the master of Beata Serafina, noticing affinities with the style of Alberto Alberti.

Fabio Bisogni, an art historian, noticed instead in a well developed article some analogies with the representations of Giacomo di Nicola from Recanati Montepulciano; these were accepted also by Andrea de Marchi.

Finally, we should mention a hypothesis promoted by Federico Zeri, according to which the author of the Santa Monica cycle would be an artist from Pesaro, who was operating also in the Campania area.

Even in anonymity, these frescoes represent however an important testimony of the transitional moment from the ornate and sumptuous style dear to the late Gothic masters to the more realistic and spatially coherent of the early Renaissance. The seductive courtly grace of some figures, with those participating in the “Banquet of Herod“, join the severe layout of other episodes, such as in “San Giovanni a Patmos” or in the “Preaching of the Baptist“, pervaded by an atmosphere of great emotional concentration.

The background wall, without frescoes, now houses an imposing Crucifix in polychrome wood, a powerful figure dating back to the second half of the fifteenth century.

We can therefore affirm that the frescoes of the Santa Monica Oratory, together with the ones in the adjacent temple of St. Augustine, constitute for the ancient city of Fermo a considerable patrimony of art and culture and for the visitors an opportunity to better know the artistic beauties of the Picenum area. 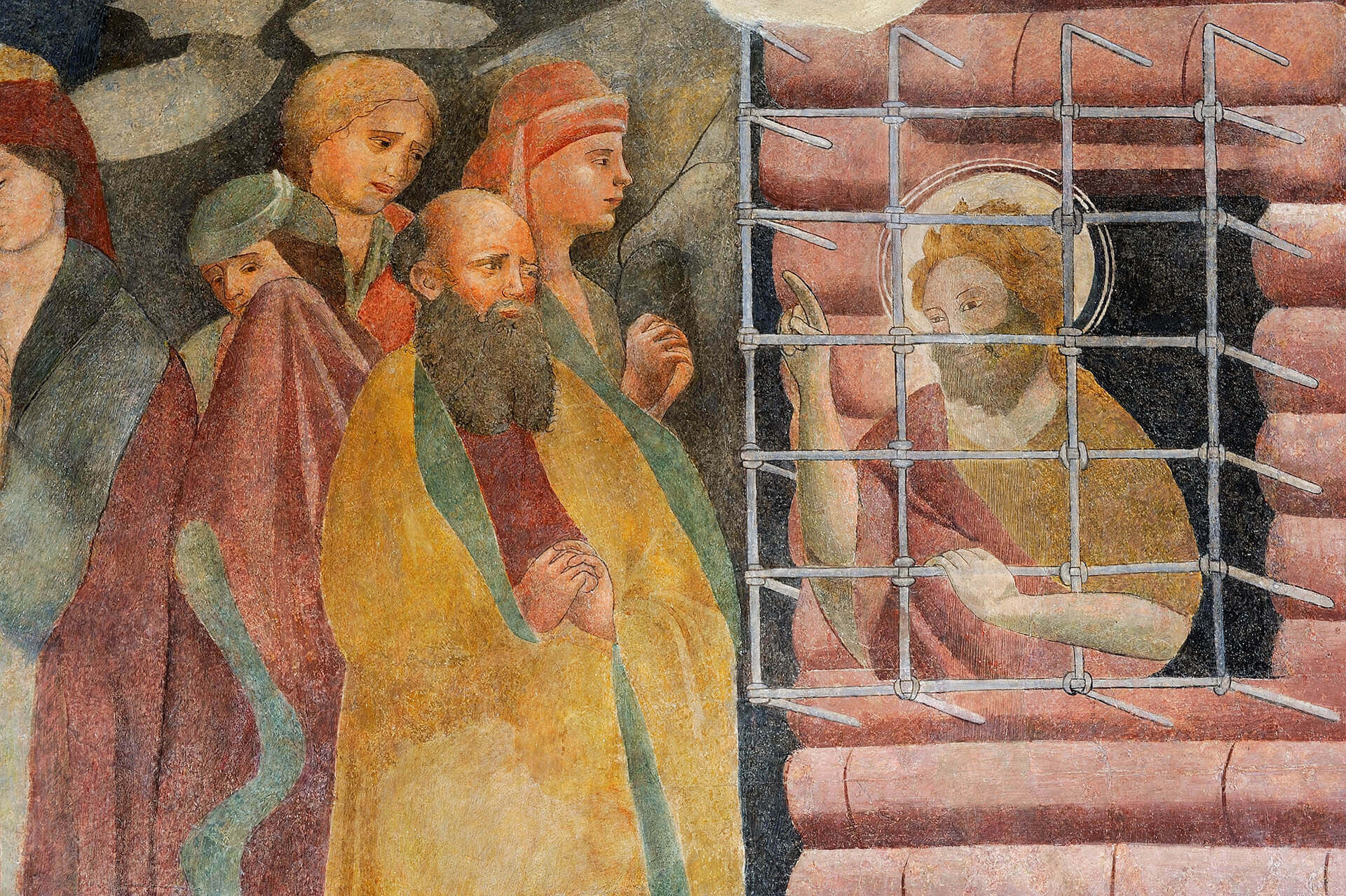 Built starting in 1250 at the behest of the hermit order, it was extensively remodeled in various eras, up to 1738 when the church took on its current appearance. Inside, the frescoes painted in different centuries show the evolution of the painting style of the Giotto-Rimini, Fabriano and Bolognese schools. Its history is linked to the Reliquary of the Holy Thorn of the crown of Jesus Christ, stolen by the Fermo in 1377 from the city of Sant’Elpidio a Mare.

The St. Augustine Church, dating back to the mid-thirteenth century, was founded during the Romanesque-Gothic period; transformed in 1360, it was subsequently modified. It has a high facade with two orders, preceded by a staircase. Remains of the primitive construction are visible on the right flank.

The architectural structure of the Church

The interior (eighteenth century), with a single nave in the form of a Latin cross, is very interesting for the frescoes (second half of the thirteenth, fourteenth and fifteenth centuries), that develop on the walls. The church has a floor that is raised off from the Romanesque building by about three meters and it reveals the structure of the Gothic church.

The frescoes of St. Augustine Church

Near the entrance, on the right, there is the Madonna with the Child and the Saints Agostino, Antonio Abate and Antonio da Padova.

Behind the second altar on the right, below you can admire the thirteenth-century frescoes with the Saints, the Madonna and the Child, another Saint and the Madonna della Pace; above, there are other frescoes from the fourteenth century with the Crucifixion, the Saints Peter and Paul and, above, the Annunciation.

On the right side of the presbytery, there are some fragmentary frescoes of the ‘300 and’ 400 with the Eternal and Saints. on the left, in the area previously occupied by an old chapel, there are other frescoes of the second half of the 14th century, among which, above, Madonna della Misericordia and Saints, below, Annunciation, Crucifix, Eternal Father and two saints; next to the left side of the transept, the Annunciation and Marriage of the Virgin (1400). Along the left wall, in the first pillar Saints (1400) and on the next pillar the fifteenth century Madonna with Child and Saints; behind the second altar the fourteenth-century fresco with the Dormitio Virginis, followed by many frescoes from 1400.

In the Chapel of the Thorn (left arm of the transept) there is a Gothic reliquary with the Holy Thorn, according to tradition one of the thorns of Jesus’ crown; it was previously located in Sant’Elpidio, but was stolen and transferred in 1377 to Fermo. 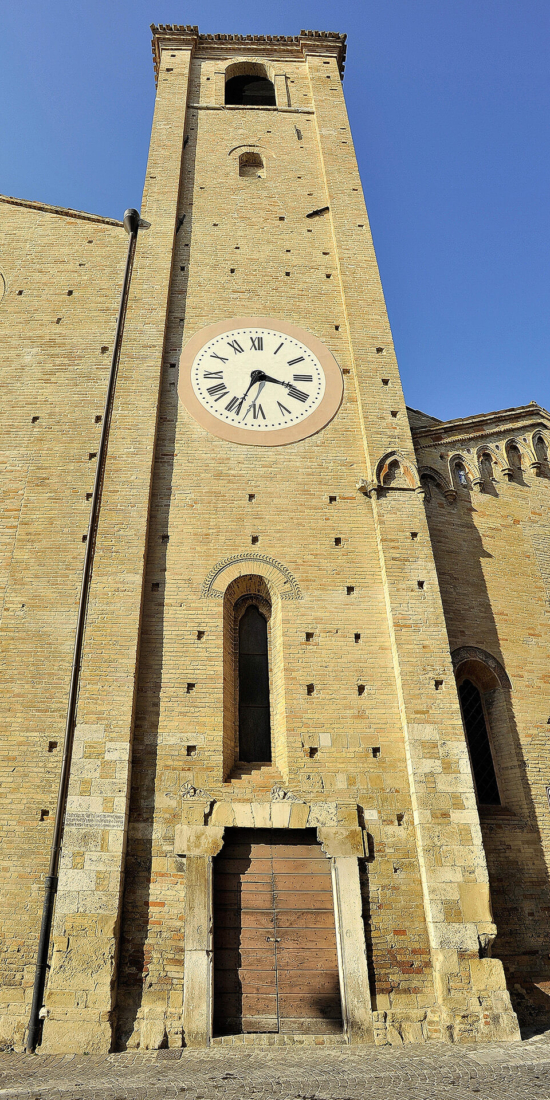 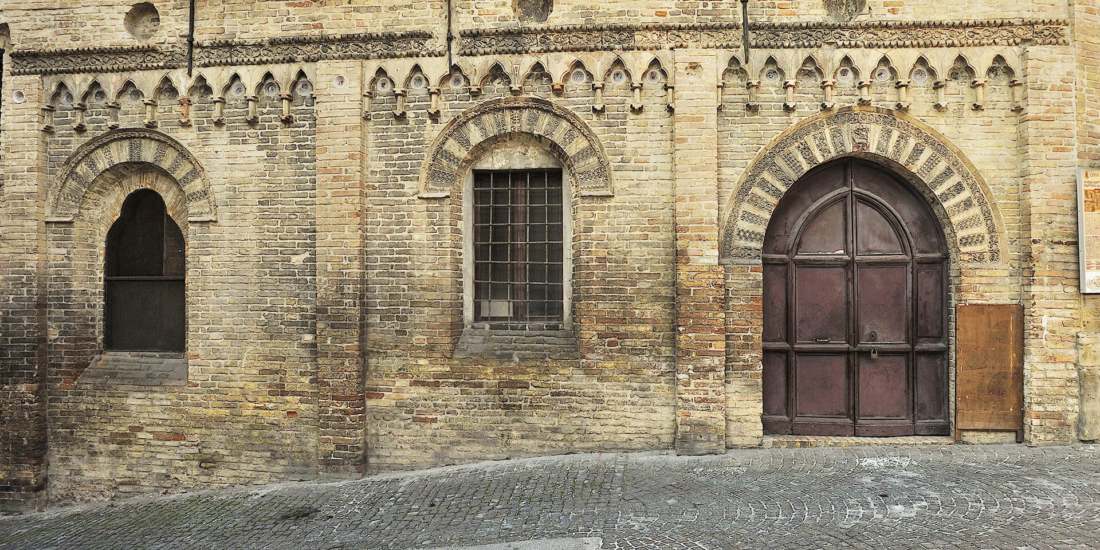 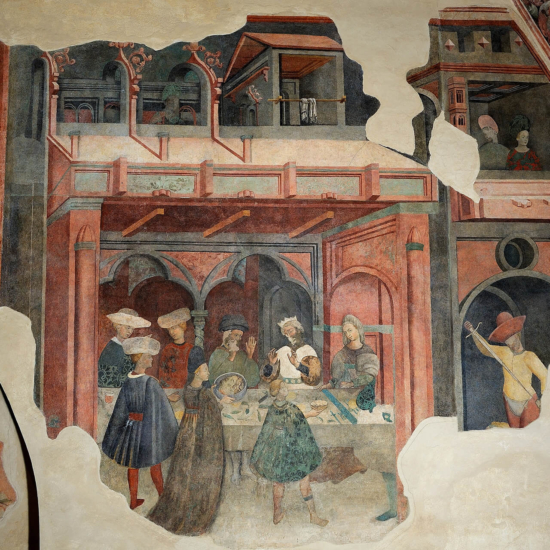 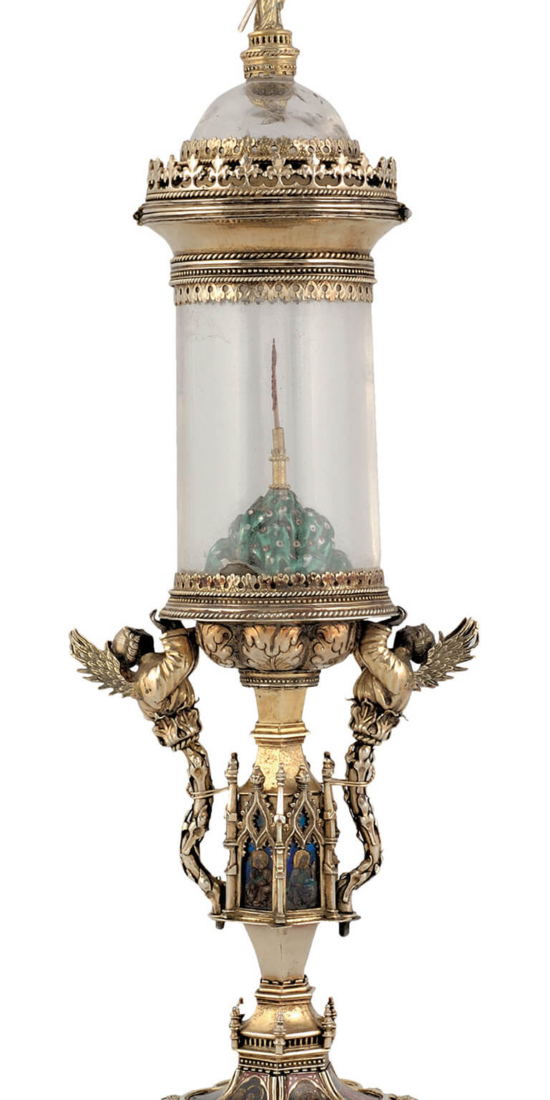 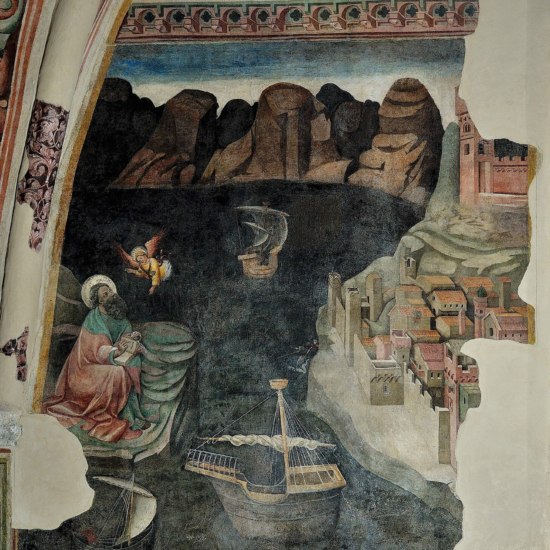 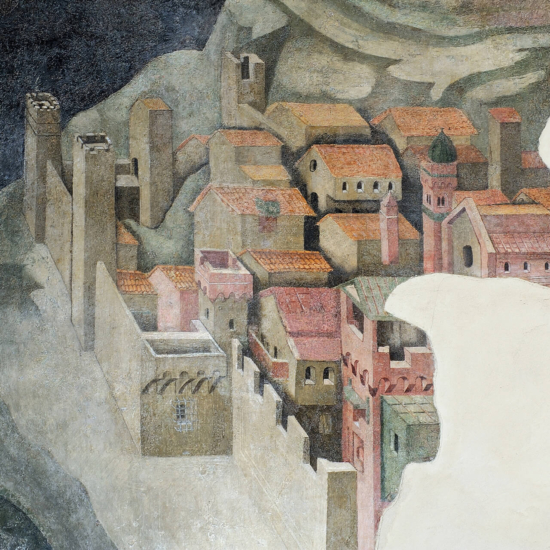 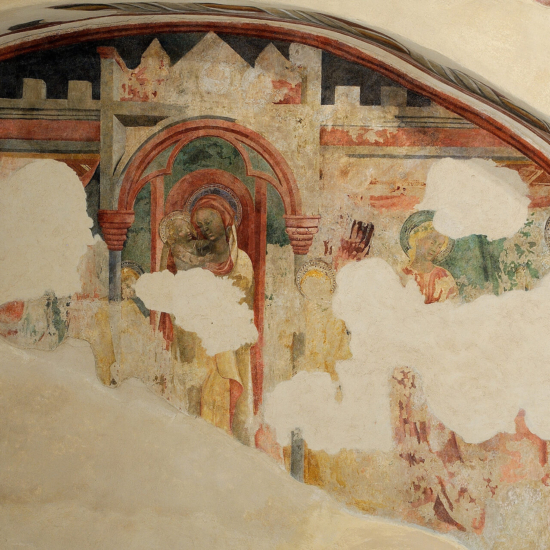 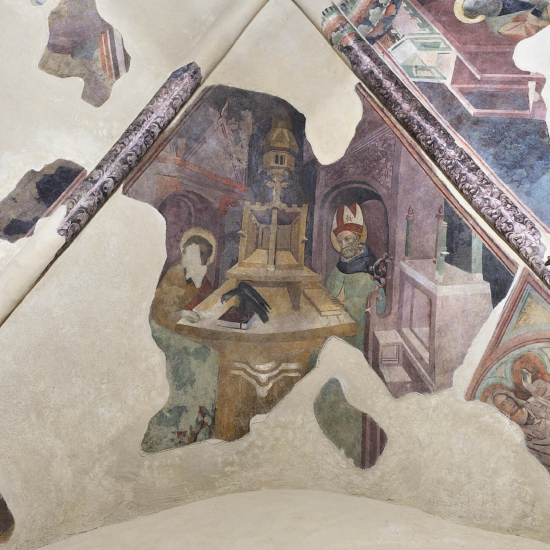 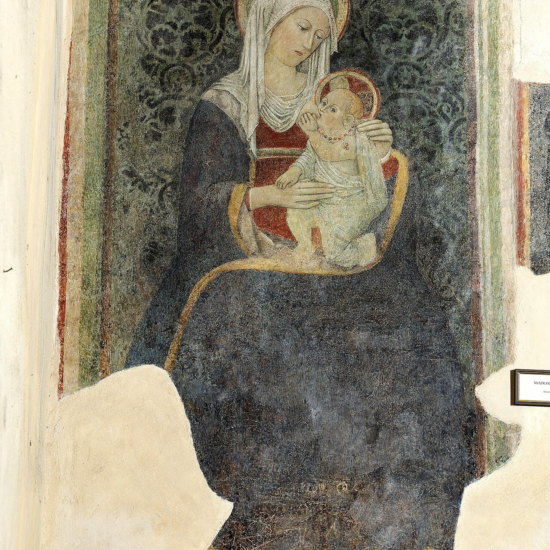 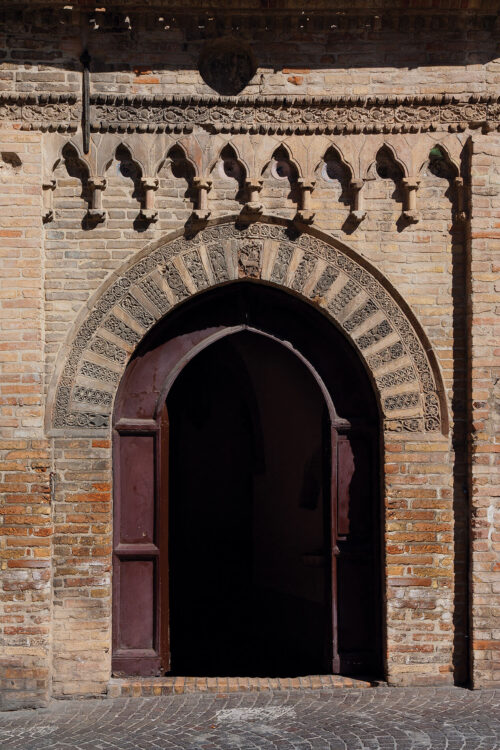