Every brick a story

From Piazza del Popolo to the Cathedral: the simbolic sites of the city

Fermo with its multimillennial past is one of the richest centre of Marche when it comes to history and art. Narrow alleys, elegant noble palaces and suggestive views characterise the historic centre that, as if times had never passed, still preserves its urban layout from the Renaissance.

Piazza del Popolo is the heart of the city, accurate and linear in its forms, it is bordered by two 16th-century porticoes in bricks. This square houses the oldest public buildings, each with its own architectural feature that, however, follow the rigour and uniformity of the square.

Palazzo degli Studi with its elegant frescoed loggia that connects it to Palazzo dei Priori, shows in the middle of the facade a tabernacle preserving the patron saint Santa Maria Assunta’s statue. The four busts on top of the windows portray the Popes who contributed to Fermo University, located here until the 1800s. The building houses today the Civic Library, one of the top ten in Italy; it preserves more than 300.000 volumes. Among the most precious books of the collection there is the Libro delle Ore (The Book of Hours) belonged to Christine of Sweden and an epistle de su gran descubrimiento (of his great discovery) by Christopher Columbus from 1493.

Palazzo dei Priori, the oldest public building of the town, with its impressive Renaissance facade houses the civic museums: the Art Gallery, the pre-Roman Archaeological Section and the amazing Sala del Mappamondo (Globe’s Room), ancient heart of the civic library.

The Art Gallery preserves works from a period going from the Middle Ages to the XIX century, including many of great importance like the precious boards representing the Stories from the Life of St. Lucy by Jacobello del Fiore, a gothic masterpiece from the early XV century, the Adoration of the Shepherds by Pieter Paul Rubens, a fascinating painting by the great Flemish artist, and the Pentecost by Giovanni Lanfranco, a majestic altarpiece of the Baroque’s master. Picentes’ and Villanovan culture’s finds are instead the heart of the archaeological exhibition that, together with the municipal Representation rooms enrich the itinerary.

Fascinating and mysterious is the old Globe Room, completely covered with wood, it constitutes the original nucleus of the city library and it owes its name to the large globe from the XVIII century hosted there, by the Venetian cartographer Silvestro Amanzio Moroncelli.

The Governor’s Palace closes the Square: its building started in the XVI century. Today’s seat of the City Hall, it owes its name to the pontifical representatives, chosen among the closest relatives of the Holy Father that dwelt in this building to handle the pontifical business in the area.

Just after the Square we find the Great Roman Cisterns, an amazing architectural building made of thirty rooms connected to each other, built two thousands years ago for the water harvesting and distribution. Hidden in the basement of a part of the historic centre, they are an unparalleled monument in dimensions and state of conservation, unmissable for every visitor. Along via Mazzini, the street that leads to Girfalco Square, the highest point of the historic centre, is located Teatro dell’Aquila, the city theatre. Provided with more than one thousand seats, divided into a large stalls area and five floors of boxes, Teatro dell’Aquila of Fermo is the largest historical theatre in Marche. It was inaugurated in 1790 under the name “Nuovo Teatro dell’Aquila” (New Theatre dell’Aquila), because it was meant to substitute the “Old” one, partially destroyed in a fire. The magnificence of the interiors anyway can’t be realized from the outside. The sobriety of the facade would never let one foresee the wealth of the red furnishings, the elegance of the decoration of golden stucco and the white parapets or the majesty of the ceiling decorated with a mythological scene.

Going along via Mazzini, you can reach the city overlook where the solemn Cathedral dedicated to the Assumption of Mary stands out, with its Romanesque-gothic facade in Istrian marble from 1227. Noticeably asymmetrical due to the decentralized tympanum, the Cathedral shows an astonishing portal with a pointed arch, on top of which there’s a pinnacle and an impressive rose window from the XIV century, with pierced leaves and twelve small twisted columns. The interior, restored at the end of the XVIII century in neoclassical style, magnificent and impressive, preserves in the basement the ruins of an ancient church from the V century AD, proof of the Christian cult’s antiquity in the area.

The amazing view you can enjoy from Girfalco Park, rich in centuries-old trees, allows to range from the sea toward the hills of the backcountry to the Sibillini Mountains and it gives back to the tourist the privileged position that made Fermo a flourishing centre of studies, cultural and commercial exchanges; it has always been a land of hospitality and warmth.

Piazza del Popolo is the heart of the town of Fermo. Bordered by 16th century porticoes in bricks, it houses the oldest public buildings of the town.

The Museum Complex of Palazzo dei Priori, dating back to 1296, houses Fermo Civic Art Gallery. It includes the Globe Room. 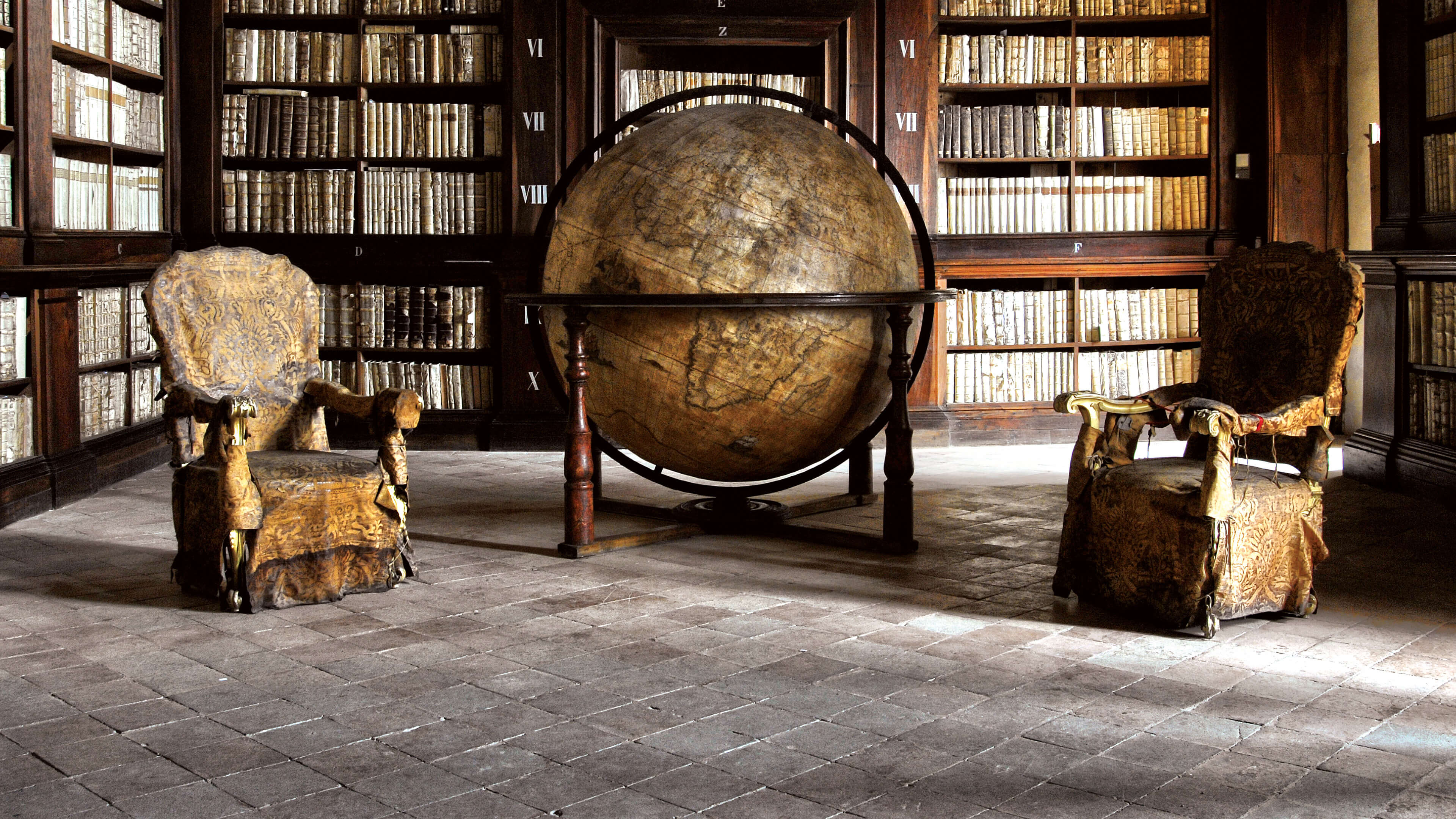 The Globe Room is located in Palazzo dei Priori in Fermo. The wooden Globe was designed by abbot Amanzio Moroncelli in 1713.

The Roman Cisterns of Fermo are a true patrimony of the Augustan age hydraulic art, a Vitruvius’ ingenious idea. The entrance is in via degli Aceti. 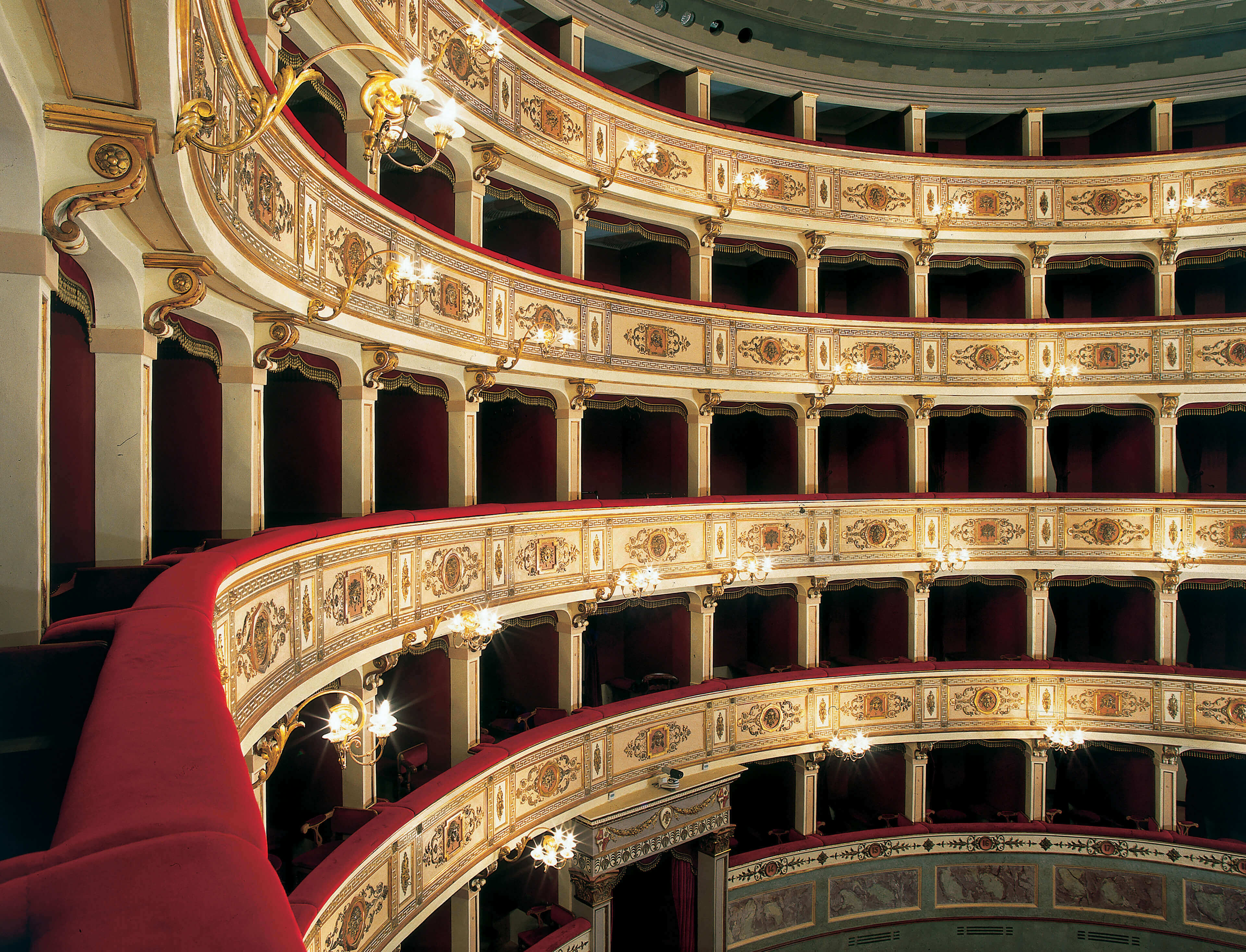 The Teatro dell’Aquila of Fermo was inaugurated in 1791. Ever since, it underwent many restorations and hosted numerous famous celebrities.

The Fermo Cathedral, the Cathedral of the town, rises on Girfalco Hill and it shows a Romanesque-Gothic facade and mainly neoclassical interiors.